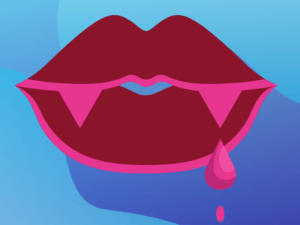 Vampire Lesbians of Sodom is just as hysterical, quirky, and off-kilter as its title. This is one gut-busting piece of camp!

Once the longest running Off-Broadway show, Vampire Lesbians of Sodom tells the saga of two fatally seductive vampiresses whose paths first collide in ancient Sodom. Their bitter rivalry as bloodsuckers but more importantly, as actresses, endures for two thousand years with stops along the way in 1920’s silent movie Hollywood and contemporary Las Vegas.

This production is a fundraiser for Fringe Fort Myers. Please note performances are in our classroom.